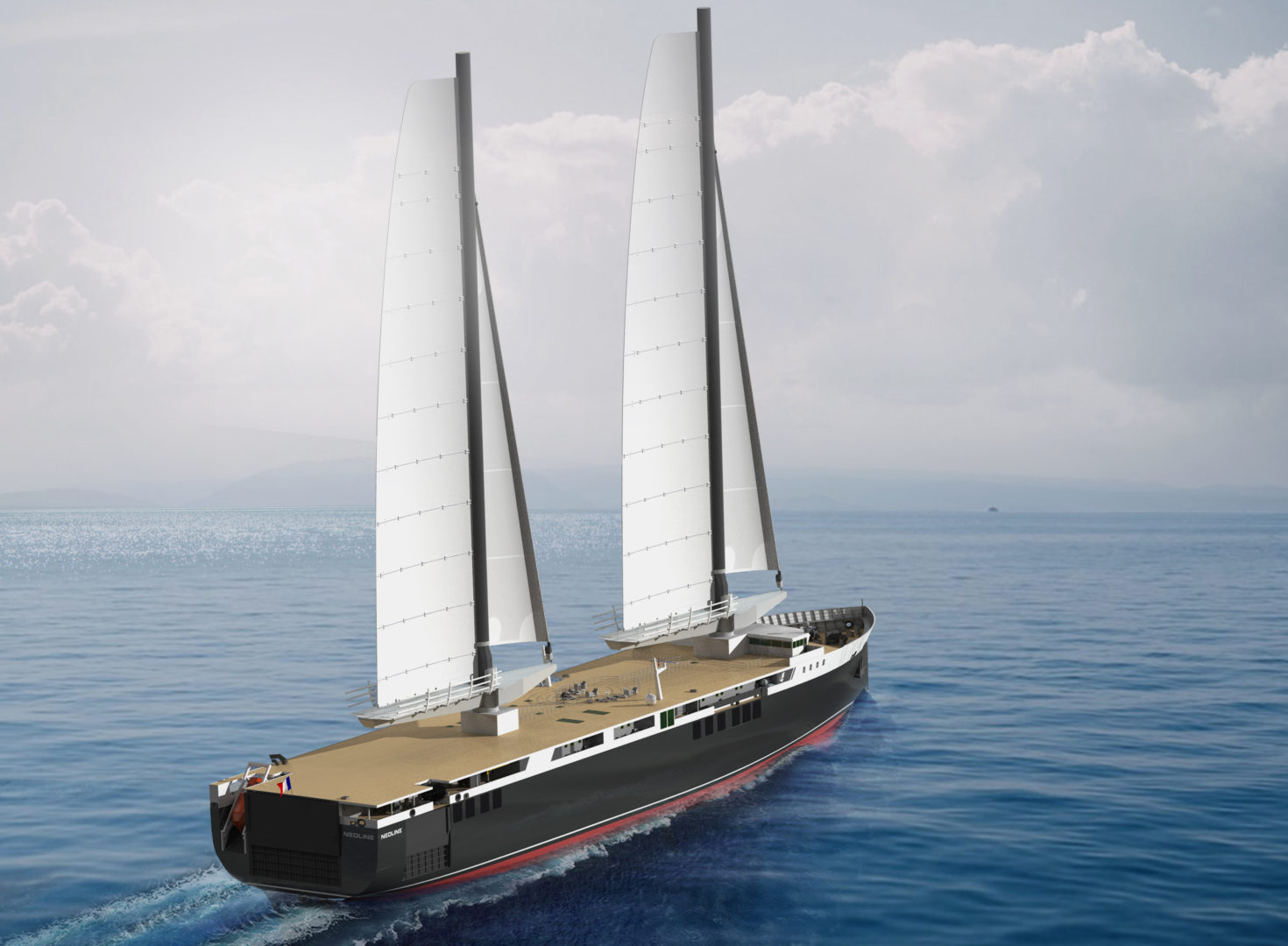 As a result of the collaborative work carried out by NEOLINE and its technical partners, the NEOLINER is the pilot project vessel that will demonstrate the profitability and attractiveness of the NEOLINE solution for shippers: the choice of a low-carbon and stable maritime transport price, regardless of the oil prices. 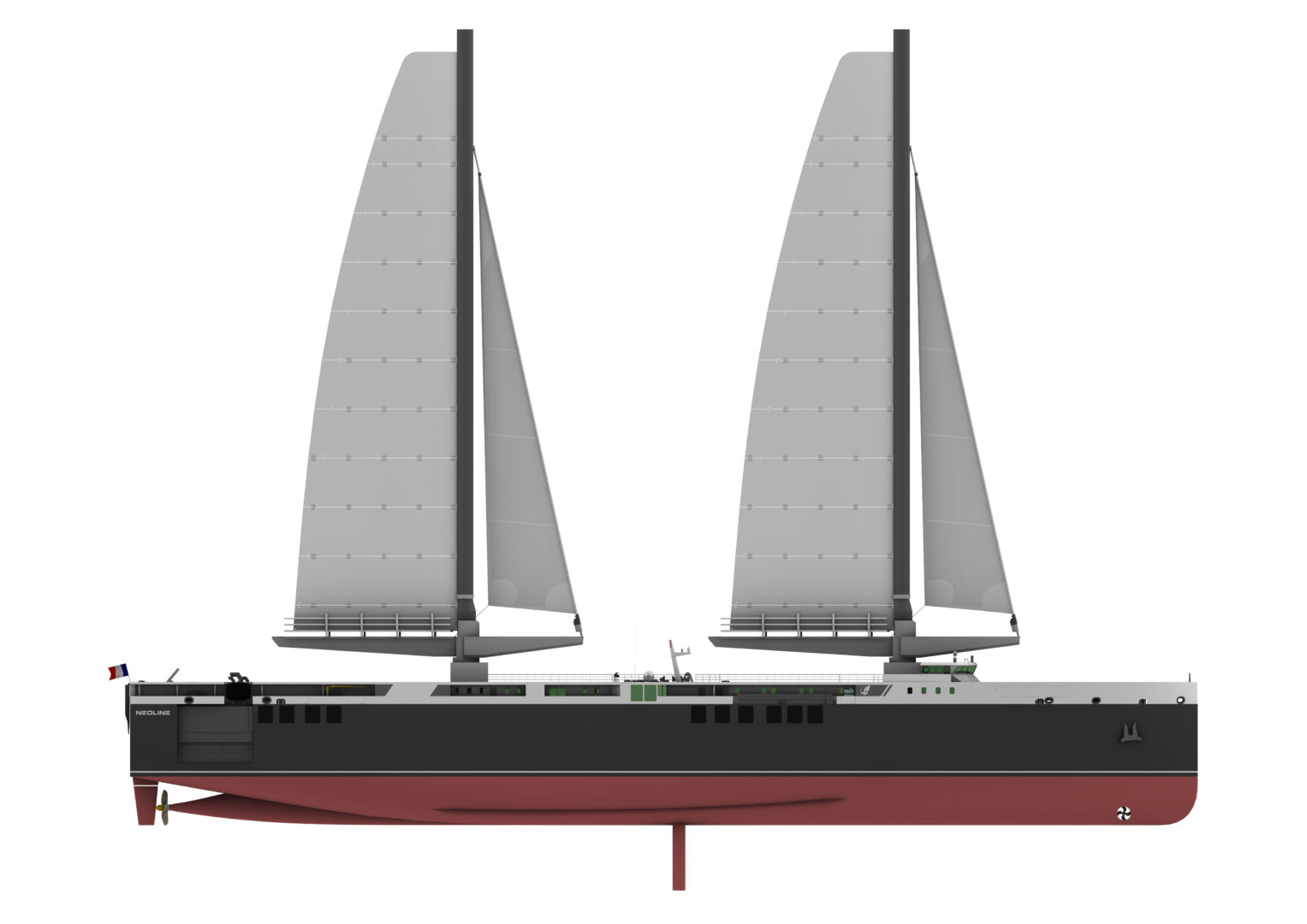 Initially planned with a duplex rig, NEOLINE chooses in 2022 to equip the NEOLINER with the Solid Sail rigging solution developed by Chantiers de l’Atlantique and with anti-drift plans, which favor the regularity and efficiency of navigation under sail.  These elements are retractable to allow access to a majority of ports.

Two pilot project ships are planned and based on this concept, which will represent a first step before considering larger sizes and other shipping sectors.

The innovative technical combination of the NEOLINER concept is covered by an international patent.

A cargo 100% secured onboard, cargo hold and main deck 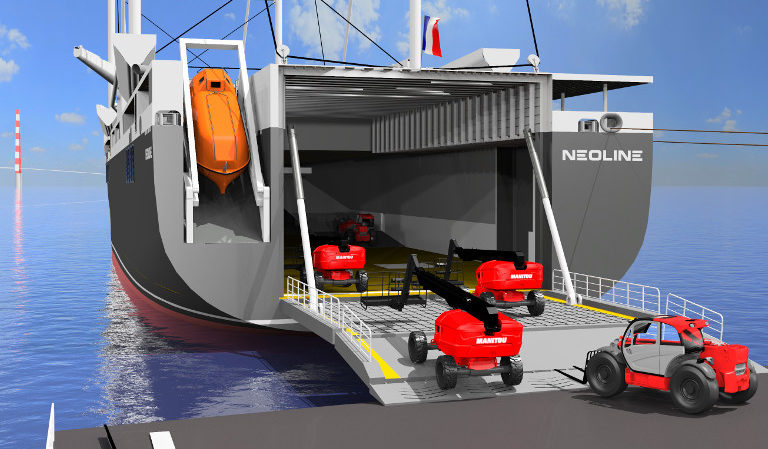 Equipped with a loading ramp, the NEOLINER can load parcels of various sizes and packaging within 3 loading areas (a main garage of 1150m², a steerage of 368m², a lower garage of 850m²) fully protected and secured from rough weather conditions.

Its transport capacities are optimized to load both light freight and oversized parcels, up to 9.8m high and 200 tons, without the need for lifting.

In terms of volume, the NEOLINER’s carrying capacity is: 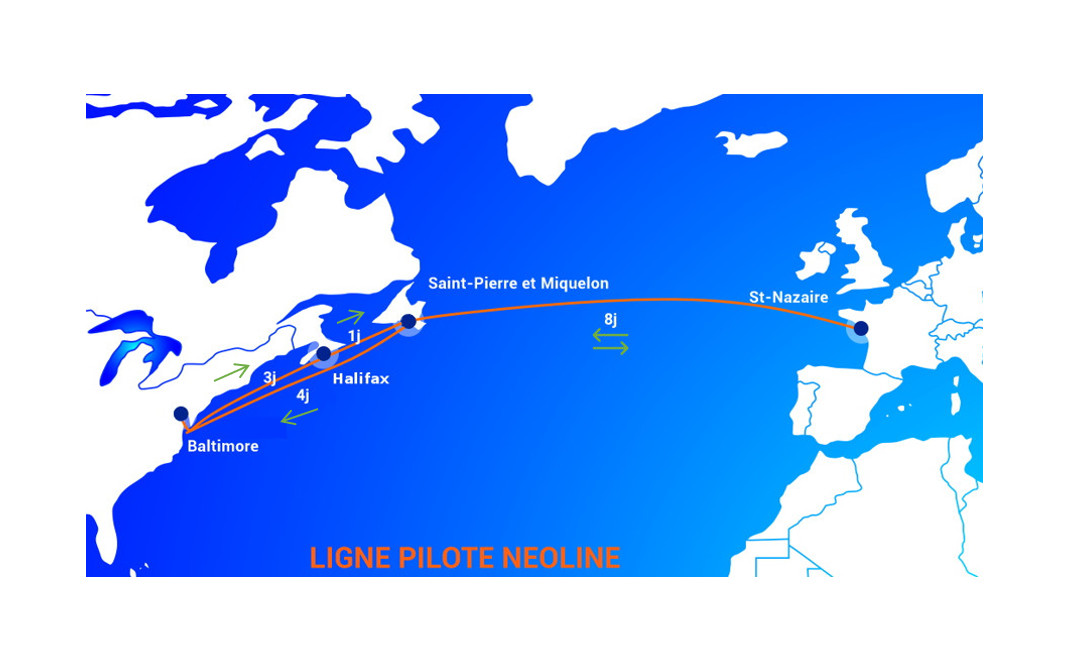 The sizing itself of the pilot project ships is supposed to set us apart from the competition with the main lines which benefit from a large scale effect. As a result, the transatlantic route operated by NEOLINE will focus on a niche market, offering new capacities in terms of type of freight (rolling and out of gauge freight) and destination ports.

The first shipping route plans to connect St-Nazaire to the East Coast of the United States (Halifax/Baltimore) as from 2025, calling at St-Pierre and Miquelon. The objective is to operate this line with two vessels thus offering a fortnight service.

The operational conditions on this route were simulated over 5 years of meteorological history, using a routing study conducted with D-ICE Engineering. The results validated the prospects for bunker savings while confirming that voyage schedules would be met at a commercial speed of 11kt.

Shippers will benefit from high-quality transport combined with a stable freight rate with no variable factors due to fluctuations in bunker prices (BAF). The tariffs proposed by NEOLINE are not affected by the implementation in 2020 of the IMO Sulphur Directive.

Thanks to the optimized size of the ship, the ramp will allow the loading of heavy, rolling and out of gauge freight units, combined with the specific layout of its various decks, the NEOLINER can load a very wide range of cargo units.

An innovative propulsion together with an accurate weather routing and adaptive energy management using diesel-electric auxiliary propulsion will all together allow NEOLINE to guaranty a reliable transit times in accordance with current logistics standards.

The NEOLINE transport solution will reduce GHG emissions by up to 90% on an ocean crossing, and eliminate SOx and NOx emissions. This performance will improve the CSR strategies of our shippers’ supply chains.

A TRANSPORT THAT CONVEYS A MODERN AND POSITIVE IMAGE

The NEOLINE transport solution will convey a strong identity, offering shippers the opportunity for positive visibility and the benefit of added marketing, environmental and societal value.

Open to all shippers, the NEOLINE pilot line will offer as from 2025, a tailor-made service between the European and American Atlantic coasts, as well as the Saint-Pierre & Miquelon archipelago for:

For any information on the NEOLINE offering or request for a quotation: please contact Adrien Prot.